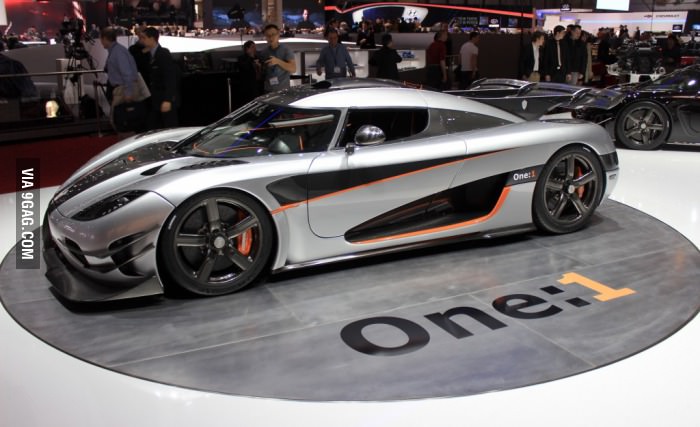 We’ve got some information about the new fastest car in the world. First of all it is Swedish, it’s called Koenigsegg One 1 and it will be released in 2014, after some road tests.
This great piece of engeneering is delivered by a small company, based somewhere in South of Sweden, on an old airbase.
Then is the power. The One 1 model will have 1400 hp (1045 kw) and only 1400 kg. This means that the weight-horsepower ratio will be a true 1:1. The whole bunch of horses comes from a 5.0 l V8 engine.
About the power-weight ratio, von Koenigsegg, said that the car’s weight will include all fluids and even the driver: “Other cars have achieved this but by measuring dry weight – no oil, no water, no fuel or other fluids” said von Koenigsegg.
The fastest car in the world: the speed
Calculations have shown some astonishing results. The new Koenigsegg will be the fastest car in the world in the 0-200 km/h, 0-300 km/h and 0-400 km/h sprints. The Koenigsegg engineers believe that it can achieve 400 km/h in just 20 sec. The top speed of new hipercar is 450 km/h, this is 19 km/h more than the top speed of Bugatti Veyron Super Sport.
The company’s spokesman, announced that the first prototype will be ready till the end of 2013. After that, will be produced a small series of One 1, consisting of 6 units.
The standart equipement will include: tyre pressure sensor, climate control, ceramic brakes and more interesting – a single clutch transmission. It is very interesting how a single clutch will handle 1400 hp.
The price: the fastest car in the world will cost about 2 mln $ and it can potentially reach 3 million dollars. The bad news is that every of the 6 cars is already bought by costumers who saw the official renders and received official information from Chirstian von Koenigsegg.
The Koenigsegg One is expected to debute in China, in late november on Guangzhou Auto Show. The launching place it’s not a random one. Guangzhou region is one of the richest in China and a true heaven for hypercars. A lot of supercar and hypercar makers choose to send first cars of new model here in Guanghzou.
More information concering the fastest car in the world, will be released later this year.