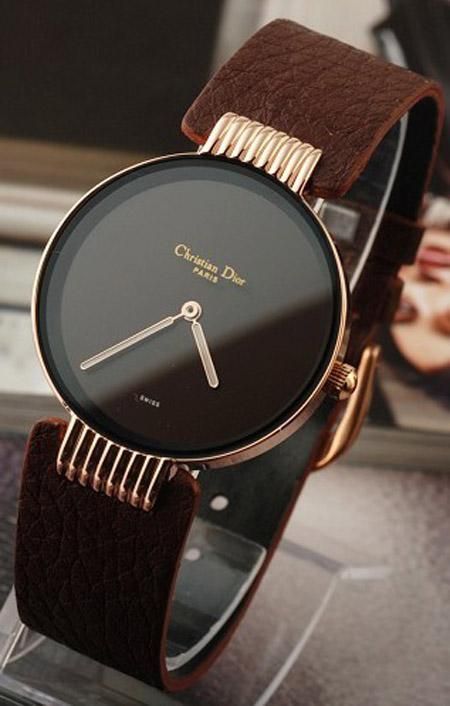 Christian Dior was born in January 1905, in Normandy, France, but soon thereafter the family moved to Paris. It was here in Paris, the fashion capital of the world, that Dior opened his couture studios in the somewhat bleak, post-war winter of 1947, in the Avenue Montaigne. His lively spring collection was an instant hit, probably because it contrasted with the austerity of Paris during and just after the Second World War. Literally, overnight, Dior became famous the world over. By the time of his death in 1957 at only 52, Dior counted among his high-profile clients’ women as stylish and diverse as Marlene Dietrich, Rita Hayworth, Eva Gardner, the Duchess of Windsor and Eva Peron. It is out of this culture of haute couture that Christian Dior watches emanate.

Dior Horlogerie is an instantly recognizable luxury collection of watches. Over sixty years of outstanding creativity is added to what is a longstanding and exceptional Swiss tradition of watch-making to produce unique timepieces that are in keeping with the ‘House of Dior’.

Dior watches are designed in the Avenue Montaigne studios. Here a team of watch-making experts start with the drawing boards and bring together particular associations of images and inspiration of all kinds to sketch the initial outlines of a new watch. These designs are then passed to Dior’s ‘Les Ateliers Horlogers‘ (watch-maker’s studios) in La Chaux-de-Fonds, Switzerland; an area that is widely referred to as the worldwide cradle of the watch-making industry.

With sophisticated software, the watch-makers at ‘Les Ateliers Horlogers‘ then determine the technical feasibility of the designs, the various components of the watch and characteristics of the bracelet. Crucially, there is an on-going discussion between the designers in Paris and the watch-makers in Switzerland.

Dior Horologer is made up of three principal collections: Dior Christal for women, Chiffre Rouge for men, and La D De Dior, also for women. In strikingly different ways, each of these collections brings together the best quality with the best design. The Dior Christal collection is a discreet tribute to Christian Dior himself. Through the use of crystal and diamonds, these watches are just like Dior couture dresses, they are as beautiful and immaculate inside as they are outside. The La D De Dior collection is relatively new, having only been launched in 2003. It is a classic line of watches inspired by 1970s style and described by Dior as being for the woman who wants to wear a man’s watch so that she is always thinking of him. The Chiffre Rouge collection is concerned with technical performance, without compromising on Dior style for men.

The reliability of Christian Dior watches is guaranteed by their conforming to both rigorous international technical standards and those norms associated with the appellation ‘Swiss Made’. The conditions required for the ‘Swiss Made’ label are strict. Set out in 1971 this code of practice dictates that at least half of the components used for the movements, the assembly, testing and controlling of the movements and finally the assembly, fitting, time-setting, and control of the watch in its entirety must be made in Switzerland.